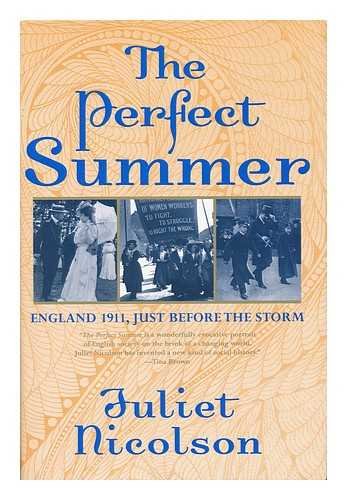 The Perfect Summer: England 1911, Just Before the Storm

The granddaughter of Bloomsbury notables Vita Sackville-West and Harold Nicolson chronicles the minutiae of the hot, sunny summer of 1911, when the rich crammed in a succession of parties as industrial strikes almost brought the country to a standstill, and WWI loomed on the horizon. Under Nicolson's lavish attentions, "upstairs" and "downstairs," the weighty and frivolous spring to vivid life. While Mary approached her upcoming coronation as queen with dread, Leonard Woolf fell in love with his Cambridge pal's sister, the budding novelist Virginia Stephen. The bewitching marchioness of Ripon arranged for Diaghilev's Ballets Russes to perform at Covent Garden, and the revealed that certain servants were selling juicy tidbits about their aristocratic employers to American newspapers. Trade unionist Mary Macarthur's fight for women's rights meshes artfully with racy novelist Elinor Glyn's adulterous affair with ambivalent lover Lord Curzon. Lady Diana Manners's tart observations of her debutante season segue to a rendezvous between a footman and a kitchen maid. Drawing on a wide variety of primary sources—from Churchill's memoirs to the tell-all —journalist Nicolson's debut, a British bestseller, serves up a delightfully gossipy yet substantial slice of social history. Photos not seen by .