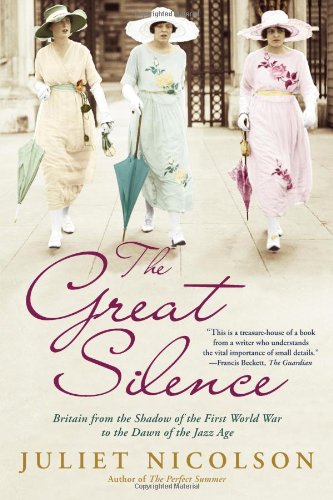 The Great Silence: Britain from the Shadow of the First World War to the Dawn of the Jazz Age

Queen Mary’s diary and the recollections of an under-chauffeur to the Portuguese ambassador are two of the disparate sources Nicholson ( ) uses in her anecdotal account of the period between the end of WWI on November 11, 1918, and the burial of an unknown soldier in Westminster Abbey two years later. Vividly portraying the horrors of trench warfare and the misery of the bereaved and wounded, she uses the metaphor of the “great silence”—two minutes of stillness commemorating the armistice—to explore Britons’ attempts to cope with the “growing despair generated by broken promises and false hopes.” Industrial unrest, advances in women’s rights, increasing drug use, and “the new craze of jazz” reveal, says Nicolson, the clamor of the nation’s progress through grief. Her sometimes affecting pastiche of Britain’s post-WWI mood is marred by the absence of source notes, disconnected vignettes, and minor inaccuracies, such as the origins of the word “barmy” (which relates to beer’s froth, not to the Barming Hospital at Maidstone) and the postwar fashion for men’s wristwatches. 37 b&w photos.