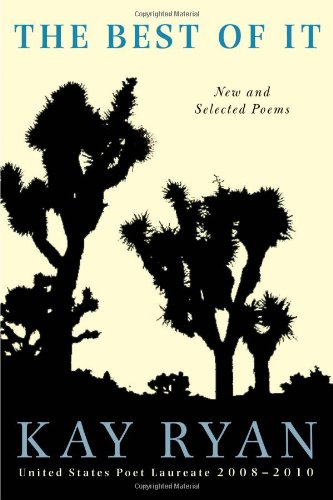 The Best of It: New and Selected Poems

Ryan, the current U.S. poet laureate, may well be the oddest and wisest poet to hold that prestigious post. Her tiny, skinny poems pack a punch unlike anything else in contemporary poetry, though not unlike haiku, if haiku could be cut with a dash of Groucho Marx. This, her first retrospective volume, which also contains a book's worth of new poems, is a much-needed introduction to the work of one of our best and most accessible poets. She asks the necessary questions hiding just beneath the obvious ones: “Why isn't it all/ more marked,/ why isn't every wall/ graffitied, every park tree/ stripped/... / Not why people are; why not more violent?” Odd rhymes draw crystal clear relations between disparate thoughts we never realized had always gone together: “As/ though our garden/ could be one bean/ and we'd rejoice if/ it flourishes, as/ though one bean/ could nourish us.” Pithy poems manage to encapsulate far more than their few words should be able to hold, as in “Bitter Pill,” a new poem: “A bitter pill/ doesn't need/ to be swallowed/ to work. Just/ reading your name/ on the bottle/ does the trick.” Sassy, smart, and deep as they are hilarious, Ryan's poems are among the best.