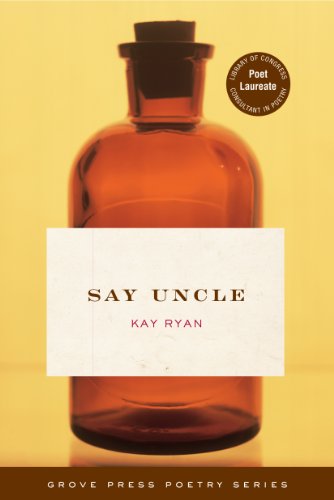 Witty, charming, serious and delightful, Ryan's fifth book of poems is also remarkably specialized. Beginning from single observations or sayings or from single facts of science or folklore, the poems seek compression, consonance, cute rhymes, and moral lessons; usually they stop short on single remarks. All are brief, irregularly rhymed, arranged in very tight acoustic patterns, and confined to very short lines (normally of no more than six syllables). Of ""The Fabric of Life,"" Ryan begins, ""It is very stretchy./ We know that, even if/ many details remain/ sketchy."" ""Agreement"" (in a delectable set of off-rhymes) becomes ""a syrup/ that lingers, shared/ not singular./ Many prefer it."" Ryan, in contrast, prefers to disagree: her poems stand up, quietly, to the received ideas she takes up or inverts. These quick, clipped poems become protests against complacency, laziness and self-pity (which can be prevented) and decay, death, entropy (which cannot). ""The Old Cosmologists,"" Ryan explains, act ""as if change were not/ something that just happens/ at certain stages/ but a private test failed/ moment by moment/ as age is."" If that judgment is ambiguous, ""The Pass"" is not: ""Things test you./ You are part of/ the Donners or/ part of the rescue."" Ryan prefers to carve molehills from mountains, to garnish her ethical lessons with thinly sliced bitterness; she instructs and delights by refusing to raise her voice. Her casual manner and nods to the wisdom tradition might endear her to fans of A.R. Ammons or link her distantly to Emily Dickinson. But her tight structures, odd rhymes and ethical judgments place her more firmly in the tradition of Marianne Moore and, latterly, Amy Clampitt. Those poets, though, wrote many kinds of poems: Ryan, in this volume, writes just one kind. It is, however, a kind worth looking out for--well crafted, understated, funny and smart. (Sept.)
close
Details