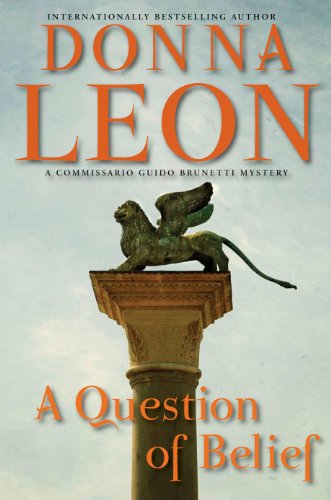 A Question of Belief

Set during an oppressive Venetian August, Leon's masterful 19th Commisario Guido Brunetti mystery (after 2009's ) presents Brunetti with two puzzles that impinge on his most intimate beliefs. Close associate Ispettore Vianello, who's worried about his elderly aunt's involvement with an astrologer, nudges Brunetti toward ruminations on the differences in male and female evidences of affection. Meanwhile, Toni Brusca, head of employment records at the Commune, who's perplexed by a female judge's erratic court case postponements, surprises Brunetti by implying that a woman could be more criminal than a man. Brunetti patiently untangles a sordid skein of desires warped, trusts abused, and loves distorted into depravity. As one good man who still believes in the rule of law despite his disgust at Italy's mounting corruption, Brunetti allows readers to share his belief that decency and honesty can, for a little while, stave off the angst of the modern world.