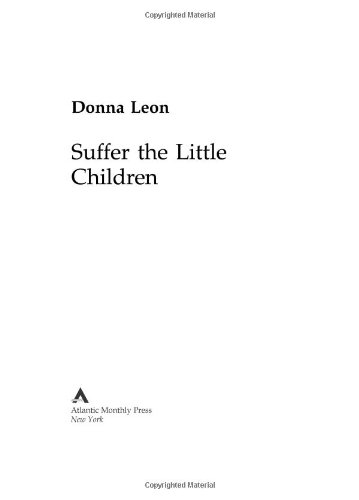 In Leon's 16th Commissario Guido Brunetti mystery, at once astringent yet lyrical, two rival police forces—Brunetti and his Venetian colleagues and the carabinieri—are both interested in a doctor who illegally adopts an Albanian infant. When three carabinieri break into the doctor's apartment and seize the child at night, they injure the doctor, leaving him mute. Much of the early action takes place in a hospital, and because Venetian hospitals appear only slightly less bureaucratic and Kafkaesque than their stateside counterparts, Leon's marvelous insights into Italian life, so sharp when she explores a military academy in or glassblowers in , aren't as fresh, sinister or compelling here. But once the IVs and bandages give way to vandalism at a pharmacy and the family secrets of a neo-Fascist plumbing tycoon, Leon regains her stride and the novel's last fifth is first-rate and masterful. Leon seldom delivers a "feel good" ending, choosing instead conclusions that are wise and inevitable while still being unsettling.