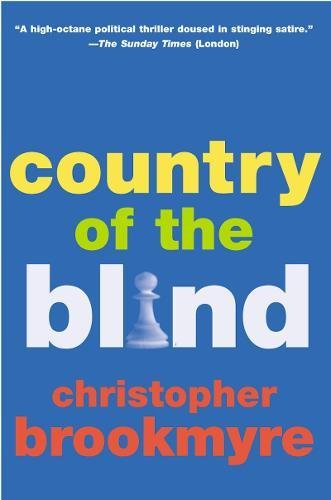 COUNTRY OF THE BLIND

Glasgow's crusading muckraker Jack Parlabane returns in the fifth novel from journalist Brookmyre (; ; etc.). A plucky English lawyer, Nicole Carrow (out to make it as a public defender in Scotland to rebel against her dad), is finding out she got more than she bargained for with potential clients like Mrs. McGrotty—"an elephantine creature in a shapeless brown coat that looked like it had been fashioned from dog-pelts and then dragged behind a heavy goods vehicle for a couple of days." Then she's approached by a strangely courteous ex-con named Tam McInnes, who gives her an envelope full of evidence of a conspiracy that goes to the highest levels of British commerce and government. Shortly afterwards, billionaire media mogul Roland Voss is brutally murdered, and McInnes and three others (including his son, Paul, and Paul's hilariously dissipated roommate, Spammy) have been artfully set up to take the fall. The only one to believe Nicole, however, is the ever-suspicious Parlabane, who knows good media manipulation when he sees it. More murders and a daring jailbreak (or is it another setup?) send McInnes & Co. into hiding and stir up a national manhunt, while back in Glasgow Parlabane races to expose the scam. While the plot may sound hackneyed, Brookmyre's deft character sketches, street-level dialect and mercilessly satirical observations of cross-border politics, journalism and human zaniness keep this good-sized novel moving smoothly along. The U.K. press has called Brookmyre a Scottish analogue to Carl Hiaasen and Elmore Leonard; actually proves it.