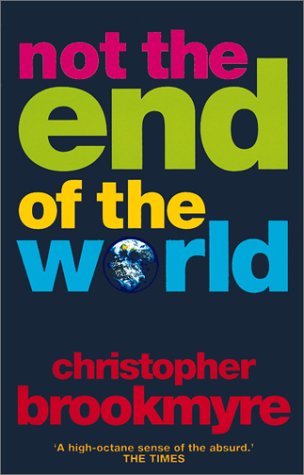 Christopher Brookmyre, Author NOT THE END

British author Brookmyre (; ; etc.) makes his American debut with this thriller, but seems to have left most of his punch on the far side of the ocean. Scottish photographer Steff Kennedy is attending a B-list movie festival, held at an L.A. hotel, where he intends to snap some pics and joke about the self-importance of Hollywood. There he meets and makes eyes with Maddy Witherson, a sweet, misunderstood porn star famous for her leading role in ; it is later revealed she was sexually abused as a girl by her Bible-waving father, a U.S. senator. Meanwhile, LAPD officer Larry Freeman is investigating the mysterious disappearance of a group of scientists from an ocean research vessel. Everyone's paths cross when a conservative Christian group decides to augment its anti-Hollywood rhetoric with a well-placed bomb, which literally dumps Maddy into Steff's arms. The bombers, however, demand an even more extreme remedy—Maddy's suicide on national television as an act of public repentance—or they'll blow up a boat full of Hollywood executives. While it's obvious that everyone will scramble to stop the bombers, less plausible elements like a bunch of long-lost religious scrolls and lots of chatter about the impending end of the world, are distracting. Brookmyre's previous book may have achieved some success across the Atlantic, but this jumbled effort feels like it's been cobbled together from whatever trashy American TV shows are currently in British syndication.