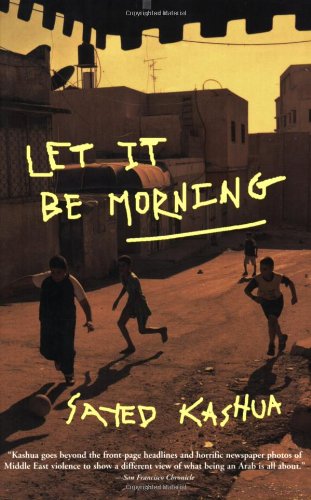 Let It Be Morning

Kashua's second novel (after ) illuminates the lives of Israel's Arab minority. An unnamed Israeli Arab journalist returns from Tel Aviv to his home village with his wife and infant daughter, in search of cheaper living. There, residents flip anxiously between Hebrew news and al-Jazeera to make sense of daily life, and high school students wear both the latest Western clothes and veils in increasing numbers. The journalist's cosmopolitan wife hates their parochial hometown, and when the protagonist finds himself eased out of his position at a prominent Jewish newspaper (surmising that "the privilege of criticizing government policy was an exclusively Jewish prerogative"), he has to hide his unemployment from her. Then one morning, the journalist finds that the Israelis have cordoned the town, cutting off all communication with the outside world. The town is plagued by infighting, mutual suspicion and rekindled feuds, revealing fault lines in the Arab community. Kashua is a journalist for the Israeli daily , and he writes about the Israeli Arabs' balancing act with knowledge and passion.