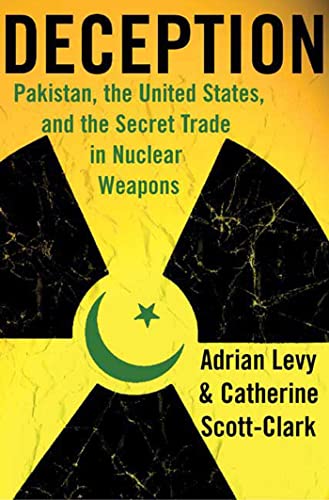 Deception: Pakistan, the United States, and the Secret Trade in Nuclear Weapons

Earlier this year, William Langewiesche's alerted readers to the blind eye the United States and other nations have turned toward Pakistan's efforts to build a nuclear bomb and to sell that technology to other nations, including the entire “Axis of Evil.” Levy and Scott-Clark ( ) work on a larger canvas, shaping their in-depth reporting into a compelling and more detailed narrative. They have not truly improved upon Langewiesche's portrait of A.Q. Khan, the metallurgist who became “Pakistan's biggest and most valuable personality” after smuggling atomic secrets out of the Netherlands. But they do substantially support the idea that the nuclear program influenced Pakistan's internal power struggles, and that American government officials led disinformation campaigns for 30 years in order to hang onto the nation as a dubious ally against first the Soviets and then al-Qaeda. The authors also hint at the possible involvement of Paul Wolfowitz and Scooter Libby in an attempt to discredit an intelligence analyst who spoke frankly of the Pakistani threat during the first Bush administration. Building on a decade's worth of interviews, the husband-and-wife investigative term serve a stunning indictment of “the nuclear crime of all our lifetimes,” in which, the authors claim, the U.S. has been an active accessory.