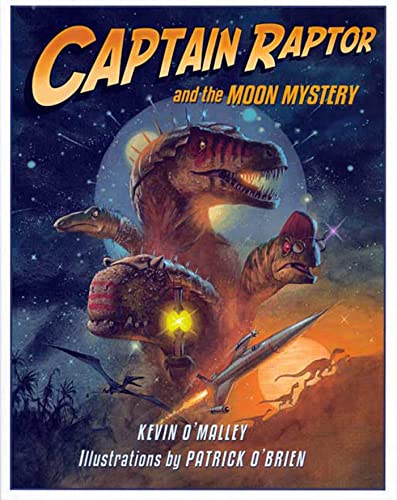 CAPTAIN RAPTOR AND THE MOON MYSTERY

meets meets Captain Nemo in this sci-fi comic about high-tech dinosaurs, which balances tongue-in-cheek cheesiness and earnest enthusiasm. After "a races across the sky and disappears on the dark side of ," Planet Jurassica's "most moon," Captain Raptor (yes, the veloci-kind, wearing body armor) goes to investigate. He and his reptilian sidekicks, including the brainy half-robot Professor Angleoptorous, rocket to Eon in their sleek silver spaceship, the . They crash-land in the ocean and withstand an attack by a giant octopus, vanquish their foe and emerge topside, where they encounter a laser-gun-toting team of astronauts. Meticulously drawn panels chronicle the adventure, with rectangular inserts providing edge-of-the-seat exposition and hearty dialogue. O'Brien's ( ) naturalistic watercolors parody museum murals of dinosaurs, while his outer-space images recall the pulp covers of sixties sci-fi novels.

O'Malley ( , reviewed Feb. 21) gamely alternates between hysteria-tinged suspense ("Could be the end of Captain Raptor?") and gallantry ("Onward to the stars!"), with plenty of time out for pyrotechnics. Derivative though it is, this outrageous yarn will please the crowd. Ages 5-up.