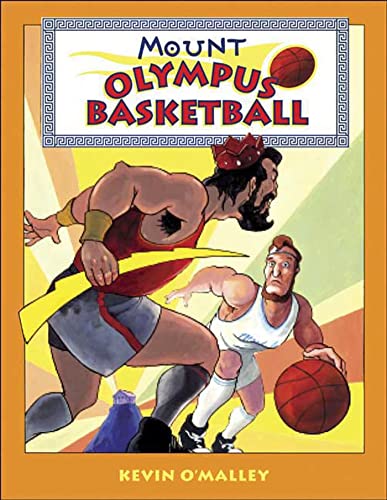 In O'Malley's () tale of Hellenic hoops, it's the Mortals versus the Gods on a modern-day basketball court. Two sportscasters calling the play-by-play wear coats and ties over togas; as they introduce the teams, the players' caricatures appear in spotlighted circles (they mug for the camera). Playing for the Gods, Athena wears battle headdress as her sly grin reveals a missing tooth, while a bald Poseidon sports a snorkel mask. Other in-joke references arise with the introduction of the Mortals: "He's just back from surgery on his heel and begging for a fight. It's..." Action-packed cartoons display the attitude- and antic-laden competition (Queen Hera turns a referee who cries "foul" into a cow), replete with speech bubbles and text blocks bordered by Grecian motifs. On-court maneuvers allude to significant moments from the ancient stories, as when a Woody Allen–looking Odysseus uses the Trojan horse (pulled onto the court by Helen of Troy) to stealthily score. The announcers pop up at the bottom of several pages with microphones to offer slapstick asides: "Zeus doesn't take losing very well. I'm sure he's got a few tricks up his tunic." For "halftime," a spread of the wonders of ancient Greece overlaps a map of the country. Ages 7-11.