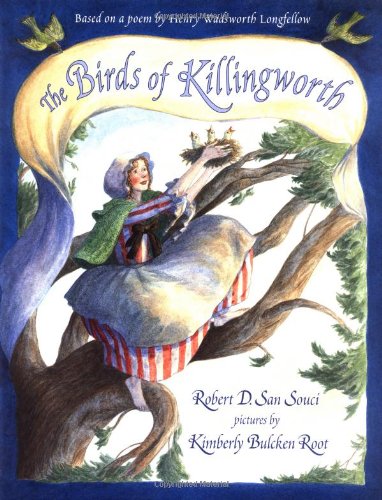 THE BIRDS OF KILLINGWORTH

Based on Henry Wadsworth Longfellow's poem of the same name, San Souci's () fable takes place in the colonial past but deals with a contemporary concern—the consequences of environmental destruction. The inhabitants of a Connecticut village plan to wipe out the birds that steal their crops. Almira, the daughter of crabby Squire Case who leads the crusade, publicly opposes the cruel scheme. Noah Arden, the young schoolmaster, has a more penetrating concern: "Surely the birds have some part in heaven's plan. Who are we to challenge the balance of creation?" Almira's father and the rest of the villagers override him. But after their natural predators are eliminated, insect pests proliferate, and the crops are laid to waste. Almira and Noah save the town by reintroducing nestlings that they and the schoolchildren have secretly fed. Root () devotes care to every element of her watercolors—figures in the background and borders are as detailed as those in the foreground—and her record of the tools and clothes of the colonies will intrigue readers. Scenes of the insect plague are particularly striking; a goodwife in cap and apron beats the insects off her worm-eaten cabbages with a wooden hayfork; horses writhe on the ground to rid themselves of swarming flies. The return of the birds seems especially welcome after the scourge, and so does Squire Case's heartfelt apology. Ages 4-8.