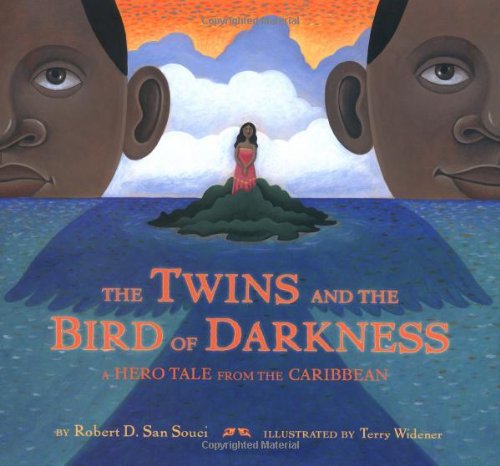 THE TWINS AND THE BIRD OF DARKNESS: A Hero Tale from the Caribbean

San Souci () returns to a Caribbean setting for this composite tale relayed in lush jungle colors and featuring a macabre multiheaded monster. When the baleful Bird of Darkness, its seven eagle-like heads on serpentine necks, claims an island princess for its own, twin brothers set out to save her. But the twins are opposite in nature: Soliday (who, like the biblical Joseph, wears a coat of many colors) is altruistic and hardworking, while lazy, conniving Salacota happily betrays his own brother. Widener's (; Forecasts, May 6) stylized perspectives heighten the sinister aspects of the plot, but his vivid acrylics create a subtle, disquieting tension that intensifies the story's suspense. In a characteristically striking juxtaposition, a tangerine sky is visible outside a sorcerer's shadowy hut, contrasting with the dark skull and crossbones hanging just inside. Color figures prominently in the layout as well, with warm hues backing lengthy blocks of text. The plot moves swiftly through treachery and triumph, but is not without its grisly moments, as when the bird issues a gruesome greeting to Soliday: "I'll strike the bargain I struck with the others:/ You give me your eyes and liver,/ I'll give you swift death in return." This well-wrought tale will best suit those who like their happily-ever-afters preceded by a good case of the shivers. Ages 5-10.