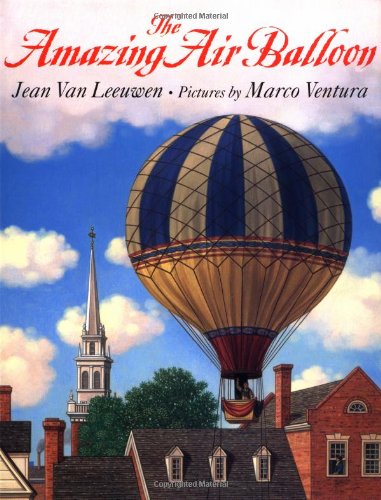 Van Leeuwen (previously paired with Ventura for ) intertwines history and fiction in this breezy chronicle of the first manned hot-air balloon flight in America. Reproduced on the endpapers, a June 25, 1784, newspaper article grounds the story in fact, announcing that the individual who "bravely embarked as a Volunteer on the last Trip into the air, and behaved with the steady Fortitude of an old Voyager" was a 13-year-old lad named Edward Warren. The author, who writes in a concluding note that little else is known about Warren, inventively fills in the blanks. She imagines Warren as an orphan, fascinated by the "great wonder" of an air balloon because, as he puts it, "I was bound to earth. Bound to the hard labor of a blacksmith's apprentice until I was twenty-one." Closely following his neighbor Peter Carnes's experiments with balloons, he is able to attend Carnes's exhibition in nearby Baltimore, where, it is rumored, Carnes will attempt to fly in his craft. When Carnes seems to lose his nerve, Warren volunteers and is soon "floating in the sky like a bird." While the boy's first-person narrative conveys the import of the event and, to a lesser extent, his excitement at participating, it is Ventura's realistic oil paintings that lift up the story. With its careful period detail, the art effectively sweeps readers back to a dramatically different time. Ages 5-up.