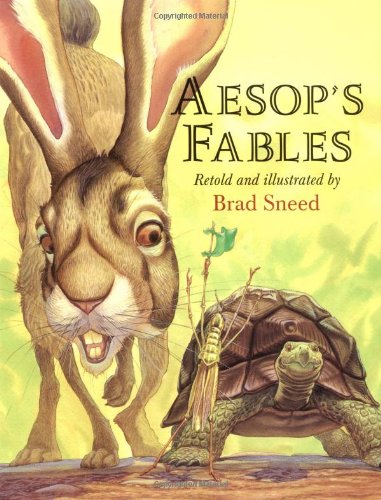 Up-close-and-personal caricatures of anthropomorphic animals dominate Sneed's ( ; ) volume of fables, creating what can sometimes be an unnerving sense of scale. In the cover art, for example, the audience shares the perspective of a grasshopper referee, who is about to wave the flag to start a legendary race between a nearly life-size jackrabbit, grinning cheekily, and a determined but friendly looking tortoise. Within, similarly large-scale pictures illustrate 15 fables, one to a spread, each ending with a stern aphorism. A boastful rooster is caught by an eagle ("Pride goes before a fall"); the detailed image of the rooster makes the knowledge that the "juicy piece of chicken" is about to become the eagle's "lunch" somewhat hard to bear. Elsewhere, a "smirking" bat laughs at a belatedly cautious caged bird ("An ounce of prevention is worth a pound of cure"). To trick a crow into dropping a hunk of cheese, a flirty fox uses a series of retrograde lines: "Hey, good-lookin', what's a beautiful chick like you doing in a dangerous forest like this?" As the fox grins obsequiously, the crow succumbs ("Flatterers are not to be trusted") and the fox's chicanery is rewarded: "But he had a mouthful of cheese!" Readers looking for more nuanced views of Aesop's fables should consider Toni and Slade Morrison's Who's Got Game? books; Sneed's retellings tend toward the message "I told you so." Ages 4-8.