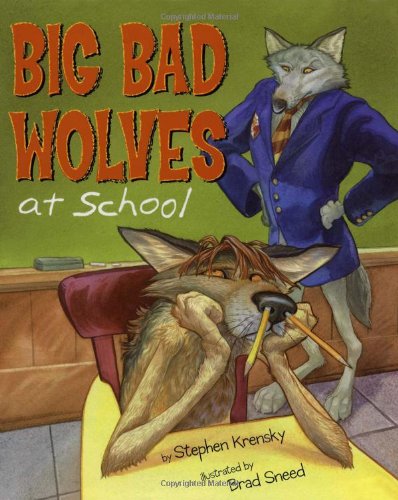 When a carefree, nature-loving wolf named Rufus is sent to boarding school boot camp to learn the ways of the big and the bad, the results are expectedly comical. Hoping to toughen up their young free spirit, Rufus’s parents send him to the Big Bad Wolf Academy. Much of the humor is found in Sneed’s ( ) whimsical watercolors of Rufus’s days there. At the huffing and puffing range, he lazily blows dandelion seeds instead of blowing over wooden cut-outs of the Three Little Pigs in their houses, labeled respectively as “Breezy,” “Gusty” and “Gale!” Study questions include “Which is easier to wear—a nightgown or pajamas?”; in an especially hilarious spread, the wolves line up in their best grandmotherly disguises, adorned with matronly wigs, bedclothes and fuzzy slippers. Readers familiar with wolf fables will best appreciate the story’s comedy, but all will cheer when Rufus’s innate traits save the day. While the shaggy-headed wolf may appear to be a bored slacker in class—in one scene he has a pencil up his nose—the reason for his seemingly impertinent behavior rests in misunderstandings and mismatched priorities. Krensky’s ( ) message seems to be that results are best when “wolves” are allowed to be themselves. Ages 4-8.