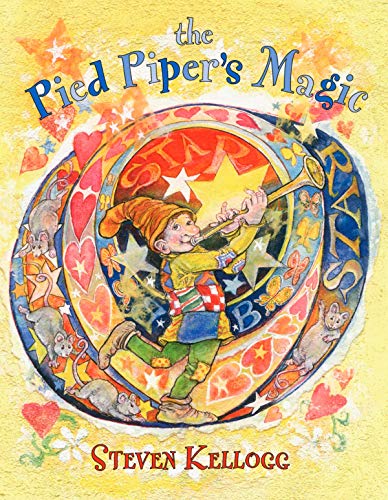 Kellogg's lighthearted take on this classic tale centers on Peterkin, a kind elf who receives a magic pipe from a miserable witch named Elbavol. He discovers that the pipe plays letters rather than notes and conjures up animals, such as a deer, by playing their names (“He was so excited that he flipped over backward. The pipe responded by reversing the letters and singing . The deer was instantly transformed into a reed”). Peterkin travels to a gloomy, rat-infested town, where he accepts the Grand Duke's challenge to rid the place of rodents. He uses the pipe to turn each of them into a star, overthrows the tyrannical duke, then revisits Elbavol to work some magic on her unhappy disposition. Kellogg depicts the magic-making in bright, buoyant mixed media spreads that show streams of colorful text and corresponding animals pouring from the mouth of the pipe (even the rats seem pretty amenable to being transformed into stars). Far sunnier than the original, this slightly educational adaptation (thanks to the built-in spelling lessons within) should please parents and kids alike. Ages 3–5.