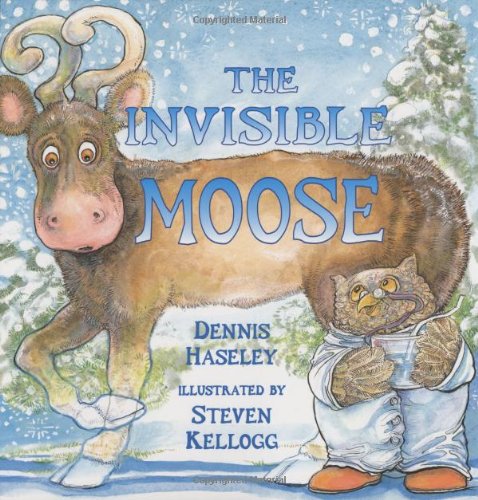 In Haseley's ( ) appealingly outlandish love story, a shy Canadian moose with antlers that "twisted upward like twin questions marks" loves the most beautiful moose in the forest, but feels invisible to her. After he sees her free a groundhog from a trap, he realizes that he loves her for her goodness as well as her appearance and summons the courage to talk to her. But a villainous animal trapper interrupts their conversation; he ensnares the beautiful moose in a net and hauls her away. Spying the words "New York City" on the license plate, the shy moose visits an owl professor to inquire what that means. This wise bird gives the lovelorn critter a potion that renders him invisible, and he makes his way to Manhattan undetected. Humorously portraying the transparent animal's search for his moose-napped love, Kellogg's (the Pinkerton books) bustling pictures reveal him navigating impossibly crowded streets and feeling queasy on the jam-packed Staten Island Ferry; other scenes play up the puns (in a restaurant, he is horrified when a woman orders chocolate mousse—"Had they cooked his beautiful moose?"). In another comic scenario, the moose dons an outrageous outfit (sunglasses, sneakers, bathrobe) so that his shape becomes visible to his beloved when he comes to her rescue. Perceptive readers will pick up on the art's more subtle humor, including an opera marquee plugging "La Passione di Pinkerton." A winsome and witty collaboration. Ages 4-up.