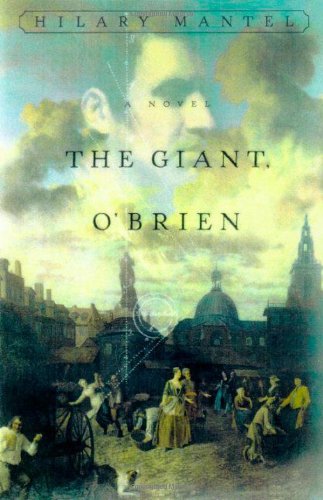 The most engaging moments in Mantel's intriguing new novel occur when the uneducated Irish characters who make up the loutish retinue of ""the Giant, O'Brien"" converse. Perfectly imagining the vocabulary and inflections of Irish peasants whose stark ignorance leaves them agape at the wonders of 1782 London, Mantel produces dialogue that is at once credible and funny. Here, as in many of her novels (Eight Months on Ghazzah Street; An Experiment in Love), cultures collide, and individual human beings suffer as a consequence. Taking as her inspiration the 18th-century Irish giant Charles Byrnes, whose bones are still on exhibit in a London museum, Mantel has imagined the fate of the man, who leaves the dire poverty and scorched earth of the Irish countryside and comes to London entertaining grandiose fantasies of riches and respect, but who encounters disillusionment and his own mortality instead. In counterpoint to the giant, who lives in Ireland's glorious past, spinning folktales and fables to earn his bread, another emigre to London, Scottish surgeon James Hunter (also a real figure), is obsessed with the ""modern"" lure of scientific research, for which he needs bodies. Generally dependent on grave robbers for his corpses, Hunter realizes that the giant is moribund, and plots to win the cadaver. Mantel makes the most of the contrast between the steel-willed, splenetic Hunter and the gentle giant, a hedgerow scholar whose generous nature and naivete are his undoing. Her picture of late-18th-century London is brilliant--especially the gloom, filth and squalor in which the lower class exists, ruled by prejudice, superstition and strong drink. She also hits home with witty comments about the national characteristics of the English and the Irish. While the narrative fascinates with atmospheric detail, however, this novel lacks the artfully maintained suspense of Mantel's previous work. It is the rich background that sustains interest rather than the giant and his nemesis, both of whom remain shadowy figures. (Oct.)
close
Details