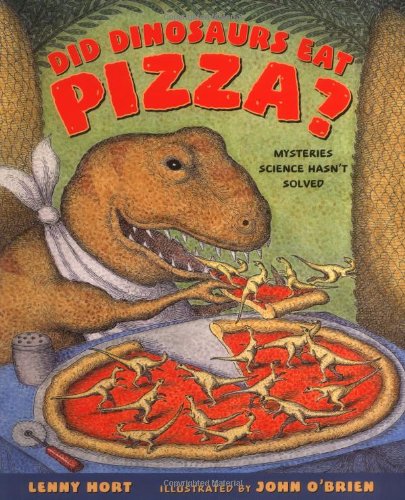 This lighthearted book examines the unknowns about dinosaurs as a way into addressing some of science's larger issues. Hort's ( ) cheerful narrative often notes the facts ("We know from fossil teeth that most dinosaurs ate plants") and then segues into information that is still missing ("But we don't know how such giant sauropods as Argentinosaurus or Seismosaurus could ever eat enough to maintain a weight that might have been as much as one hundred tons"). Some of the info, such as how the prehistoric creatures mated, is conjecture: "Perhaps male dinosaurs strutted their stuff to attract a mate, but in most cases it's not possible to tell a male fossil from a female, let alone determine what a lady dinosaur might have looked for in a gent." Among other mysteries touched upon are what color dinosaurs were, why they disappeared, and how the largest of them managed to lay their eggs so that they did not shatter on the ground. O'Brien's ( ) artwork steals the show with unabashedly silly scenarios. One particularly kid-pleasing spread, speculating on how Tyrannosaurus rex hunted, depicts a toothy T. rex at a restaurant littered with waiters' bones, bow ties and aprons, while a similarly clad dino server—his next victim?—is pushed through the kitchen door by his peers, carrying a covered dish. An entertaining way to consider how science is a field of raising questions and pursuing the answers, even if they are inconclusive. Ages 4-6.