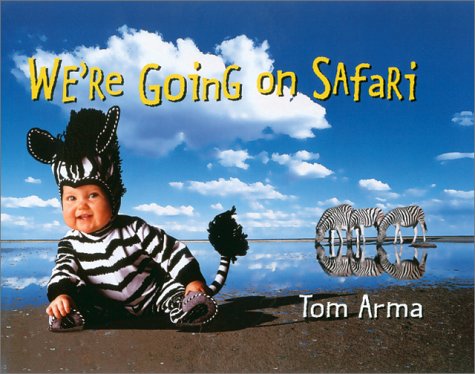 In his first full-length picture book, Arma (; ) fancifully "transports" his usual subjects—adorable infants costumed as animals—to a variety of exotic locales, pairing the cherubic-faced models with creatures living in the African savannah, the rain forest and the Rocky Mountains. A magnificent mama tiger, for example, appears to be toting her "cub" by the scruff of its neck; the baby wears a fetching striped hooded sleeper with ears and tail, grins with aplomb and gives readers a confident thumbs-up. Hort () contributes verse modeled on "We're going on a bear hunt": "We're going on safari. We're going to shoot some photos.... Get your camera ready—!" The text wears thin, but the pictures are delicious, with the three-dimensional feel and color saturation of old Viewmaster vignettes. Toddlers, an audience typically enthralled with photos of their peers, may just go ape for them. Ages 3-6.