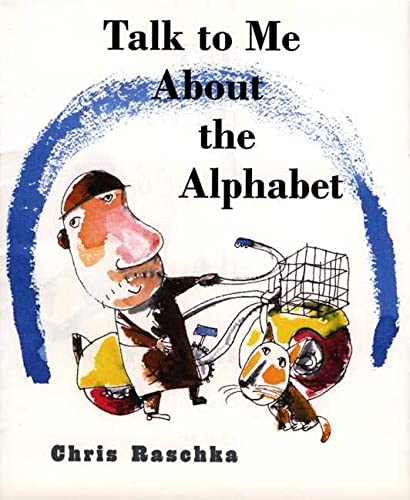 TALK TO ME ABOUT THE ALPHABET

Raschka serves up this sassy ("A is for Attitude") abecedary with characteristic verve, but ultimately the whole is not equal to the sum of its rather haphazard parts. "Don't give me numbers. Don't give me 1, 2, 3. Give me letters! Give me ABC!" demands the narrator, who bears a passing resemblance to Mr. Potatohead. Dressed in a dowdy brown suit and matching bowler, and driving "Way-cool Wheels" ("V is for my Velocipede"), he and his longsuffering cat tour the alphabet. While some sequences hang together cohesively (e.g., "M is for Milk. Mmmmmmmm. Mine!" says the fellow, lifting his glass, "N is for No!" he adds, to his cat, looking on longingly), most are non sequiturs. "Jumpin' Jupiter! J is for Jam!" finds the narrator slathering his pet with preserves, while on the next spread they chase a kangaroo and then are pursued by a lion. The cat's deadpan expressions, especially, are droll, but the relationship between the main characters is not fully explored—a notable exception being a vignette of the two curled up for a nap, bathed in a violet backdrop that coats them like a blanket ("S is for Sleep./ Soft sounds/ soothe souls./ Sleep safely./ Sssssss./ Shshshshshsh"). In characteristic fashion, Raschka manages to wring an array of expressions from just a few swift lines and a swipe of color, but readers may not identify as readily with these characters as they have with Raschka's in the past, and with such an imposed theme tying the proceedings together, the end result is underwhelming. Ages 2-5.