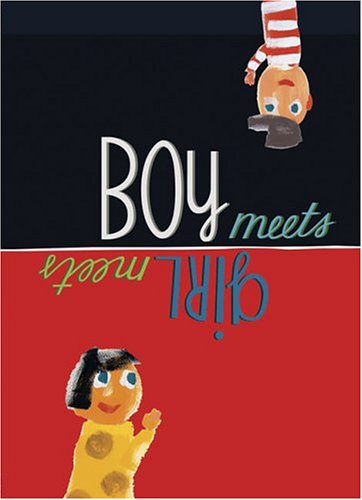 With two covers and title pages and with text written both upside-down and right side–up, Raschka's quirky text resembles a Möbius strip that never stops. The ending of each story leads to the beginning of the next. Depending on which cover you start with, either "Boy meets/ green cat/ wearing nothing/ on chair/ in sunshine/ and sees/ shade in/ table under/ glasses wearing/ dog red/ meets girl," or, "Girl meets/ red dog/ wearing glasses/ under table/ in shade/ and sees/ sunshine in/ chair on/ nothing wearing/ cat green/ meets Boy." It's a clever idea but unfortunately, the text in the second half of each sentence doesn't make syntactic sense. Radunsky's ( ) broad-stroke illustrations, like the dripping watercolors often found on a kindergarten easel create a sense of fluid motion. The figures often cleverly wrap from one turn of the page to another, and the changing font sizes complement the bright colors of his limited palette on stark white pages. As in , Raschka relies on two-word phrases to tell his story, but here the text does not add up to a cohesive whole. The reverse narrative will likely baffle readers still learning the wily ways of verbs and prepositions. Despite the book's eye-catching jacket, and Radunsky's cheery paintings, this eccentric book ultimately doesn't quite work. Ages 3-6.