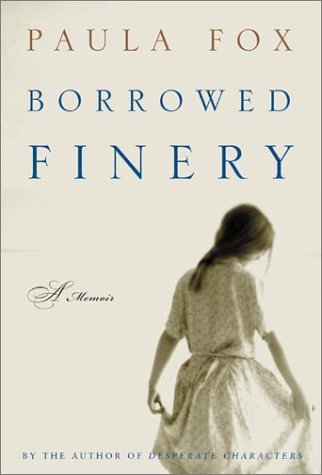 Newbery Award–winning novelist Fox () lived a rather accidental, devastating childhood. Her Jazz Age parents dropped her at an orphanage shortly after her birth in 1923, from which she was rescued by a kindly clergyman and passed along, as in a "fire brigade," to various "rescuers"—odd relatives or her parents' drinking buddies, mostly. Her scriptwriter daddy, a happy drunk, cared but was careless. Mom, on the other hand, with her "cold radiant smile," was openly rejecting. Her occasional reluctant meetings with Fox felt "as if we were being continually introduced to each other." No small wonder, then, that at age 21, Fox surrendered her own daughter for adoption. This could have been another , except that Fox is elegantly understated, relying on well-chosen detail and striking images to tell her tale. A nasty auntie crochets in "colors that suggested mud or blood or urine" and keeps her work in a sack with handles like "copperhead snakes." Her mother's one contribution to her education is teaching her solitaire. A childhood beau walks "lurching to the side like the knight's move in chess." Visiting her dying mother, Fox can't bear to use a toilet her mother might have used, and flees outdoors to use a tree. It would all be unbearably melancholic (à la Jean Rhys), except that Fox survives. The hard-won truths of her youth form the basis for the sensitive focus on family dynamics that characterizes her children's fiction—notably . Fox deserves a comeback, even if this slim memoir is too tragic for popular taste.