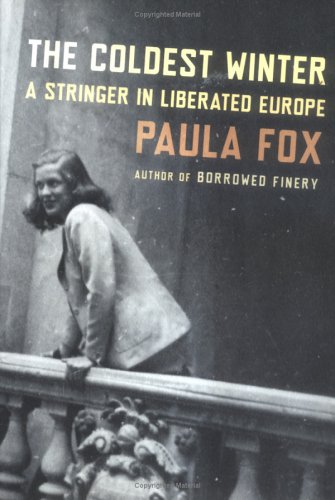 The Coldest Winter: A Stringer in Liberated Europe

A year after WWII ended, Fox, then 22, left New York City for Europe, where she found work as a stringer for a small British news service. Those who haven't read her previous memoir, , will be curious about the reasons for her desperation to escape New York, but they'll quickly forgive the omission. In sparse, careful prose, Fox relates her experiences in London, Paris, Prague, Warsaw and Spain in 1946. Her writing style is detached, often sparing details (e.g., "We fell in love," she states simply of her brief relationship with a Frenchman). Her assessments, even of herself, are refreshingly frank: "I was too young and too dumb to worry about entering a fascist country; what I was apprehensive about were my meager funds." In her most moving chapter, "Children of the Tatras," Fox visits an orphanage on the Polish-Czechoslovak border that housed children born in concentration camps. Spending time with a small boy, Fox communicates through body language. The interaction is precise and quite moving as she connects, momentarily, with the child, letting readers fill in the emotion. The picture Fox paints of postwar Europe is both profoundly beautiful and sad, and her memoir is affecting, leaving one wishing she had stayed there longer.