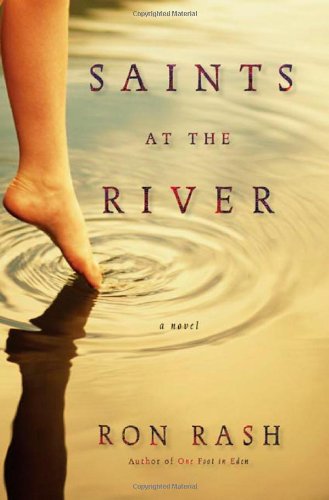 SAINTS AT THE RIVER

When the 12-year-old daughter of a wealthy banker drowns in South Carolina's Tamassee River, her death sets off an emotionally charged battle between the grieving parents, who want to put up a dam to recover her body, and the local environmentalists, who will risk everything to defend the pristine state of their river. Rash pens his novel in clear, unadorned prose appropriate to its ripped-from-the-headlines premise; only the lyrical opening passage, which recounts the girl's death, reflects his skill as a poet ( ; ). But the book is rich with nuance, mostly because Rash selects Maggie Glenn as his first-person narrator. A Tamassee native who now works as a news photographer in the state capital, Columbia, Maggie has deep ties to the town, but she's detached from the main fray. As a result, her news angles and her romantic attachments keep shifting. Maggie's rage against her father isn't sufficiently explored to carry the weight it bears in the plot, but Rash compensates for this weakness by creating detailed, highly particular characters. A professor of Appalachian Studies at Western Carolina University and author of a previous Southern novel, , Rash clearly knows the people and places he writes about, and that authenticity pays off in a conclusion that packs an unexpected and powerful punch.