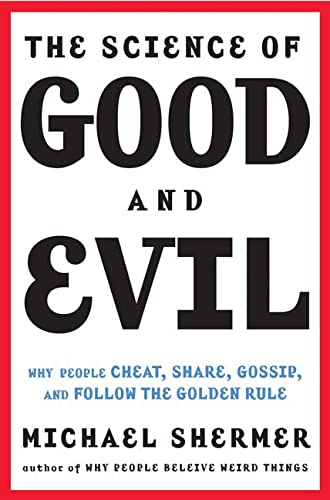 THE SCIENCE OF GOOD AND EVIL: Why People Cheat, Gossip, Care, Share, and Follow the Golden Rule

Drawing on evolutionary psychology, publisher and contributor Shermer ( ) argues that the sources of moral behavior can be traced scientifically to humanity's evolutionary origins. He contends that human morality evolved as first an individual and then a species-wide mechanism for survival. As society evolved, humans needed rules governing behavior—e.g., altruism, sympathy, reciprocity and community concern—in order to ensure survival. Shermer says that some form of the Golden Rule—"Do unto others as you would have others do unto you"—provides the foundation of morality in human societies. Out of this, he develops the principles of what he calls a "provisional ethics" that "is neither absolute nor relative," that applies to most people most of the time, while allowing for "tolerance and diversity." According to the "ask-first" principle, for instance, the performer of an act simply asks its intended receiver whether the act is right or wrong. Other principles include the "happiness" principle ("always seek happiness with someone else's happiness in mind"), the liberty principle ("always seek liberty with someone else's liberty in mind") and the moderation principle ("when innocent people die, extremism in the defense of anything is no virtue, and moderation in the protection of everything is no vice"). Shermer's provisional ethics might reflect the messy ways that human moral behavior developed, but his simplistic principles establish a utilitarian calculus that not everyone will find acceptable. 35 b&w illus.