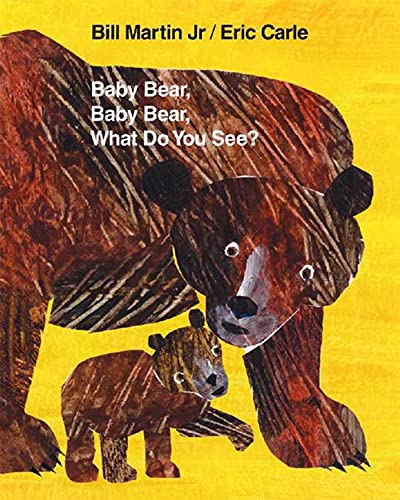 These clever creators’ final collaboration arrives 40 years after their first, , joining two previous bear sequels. Much in the same vein as its predecessors, this appealingly cadenced story introduces a sequence of animals, dramatically yet simply depicted in textured collage art against white backdrops. Readers first spot Baby Bear climbing a tree, responding to the question posed in the title: “I see a red fox slipping by me.” Red Fox in turn spies a flying squirrel gliding by, who sees a mountain goat climbing nearby, who sees a blue heron flying by and so on until a screech owl—gazing wide-eyed at the reader—sees “a mama bear looking at me.” A large-scale image of Mama Bear is followed by a spread revealing what she sees: each of the previously featured animals and (most satisfyingly) “my baby bear looking at me—that’s what I see!” Creative action words and renderings of the various creatures in motion give the book a pleasing energy, while Mama Bear’s obvious delight at finding her cub provides an endearing poignancy. The elegant balance of art, text, emotion and exposition is a Martin and Carle hallmark; they have crafted a lovely finale to an enduring series. Ages 2-8.