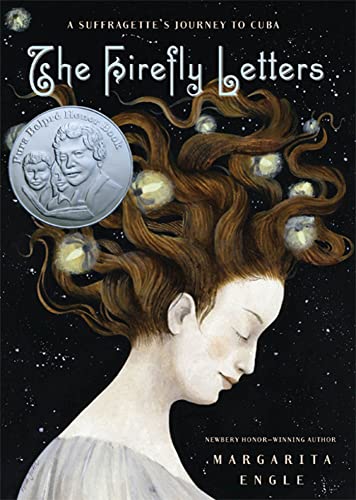 The Firefly Letters: A Suffragette's Journey to Cuba

Engle spins her latest historical novel-in-verse from the actual diaries of a 19th-century suffragette, Fredrika Bremer, who jettisoned her privileged existence in Sweden to travel and take notes on the plight of the poor. In 1851 Cuba, Bremer was assisted by another real-life figure, Cecilia, a pregnant African slave assigned as her translator by Bremer's host, a sugar baron. A third character is invented—Elena, the merchant's 12-year-old daughter who, through her interaction with Fredrika and Cecilia, grows aware of systemic injustice and her power to do something about it. As in her other novels, Engle ( ) writes in free verse, alternating among the characters' perspectives. Cecilia's story is the most poignant: Her father gave her to kidnappers in exchange for a stolen cow, and her unborn child also faces becoming a slave. But it's Elena who gives the plot momentum with a bold and risky choice that signals her own transformation. This slim, elegant volume opens the door to discussions of slavery, women's rights, and the economic disparity between rich and poor. Ages 10–up.