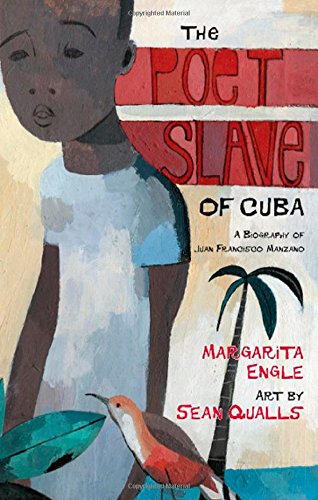 The Poet Slave of Cuba: A Biography of Juan Francisco Manzano

Engle ( , for adults) achieves an impressive synergy between poetry and biography as she illuminates the tortured life of the 19th-century Cuban poet. Born a slave, Juan is kept like "a poodle, her pet/ with my curly dark hair/ and small child's brown skin," by his "godmother" and owner, Beatriz. She grants his birth parents manumission (for a price), while refusing to free Juan until her own death. Juan shows talent for memorization, and recites literature for Beatriz's amusement. Despite his mother's payment, Juan is transferred, at Beatriz's death, to another owner, the Marquesa de Prado Ameno, who punishes Juan cruelly. There he also secretly learns to read and write—posing a threat to the Marquesa and the social order. Engle's compelling poems shift in viewpoint among seven people, and the technique works beautifully: readers thus draw their own conclusions from Juan, his desperate parents, brutal owners, the Marquesa's sympathetic son and the conflicted Overseer. Juan's poems articulate both his enduring pain and dream of release ("I sit tied and gagged./ She is there, behind the curtain./ .../ She can't hear the stories I tell myself in secret"), while recurring bird imagery signifies elusive freedom. Quall's ( ) expressionistic half-tone illustrations extend Engle's exploration of race as a cornerstone of the social caste in Spanish colonial Cuba. (Juan and his family are dark-skinned; the women who own him use a powder of crushed eggshells and rice to lighten their complexion.) An author's note and excerpts from Manzano's own poetry round out this sophisticated volume. Ages 10-up.