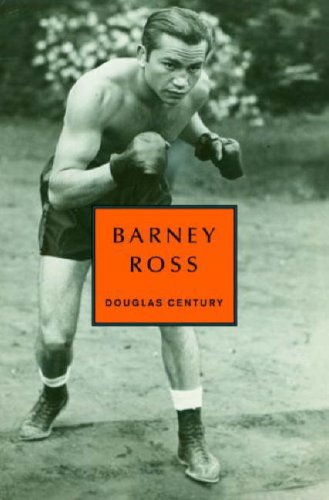 A powerful account of the career of "one of the two greatest Jewish boxers of the twentieth century," this third volume in Schocken's Jewish Encounters series delivers a short but fascinating account of life in Chicago's Maxwell Street ghetto in the 1920s and '30s: "a riotous dream of Jewish gunmen and bookmakers, fighting furriers and smashed-nose boxers." Barney Ross (1909–1967) was the son of Eastern European immigrants; his father was killed in a robbery just before Ross's 14th birthday. The teenage Ross started boxing to earn money to free his siblings from an orphanage and went on to earn three world championship titles. Century ( ) evokes the atmosphere of Ross's youth in a notorious neighborhood, as well as his later professional battles, especially a trio of now legendary 1930s bouts with Jimmy "The Babyfaced Assassin" McLarnin: "As the fighters made their entrances, pearl-grey fedoras bobbed expectantly and wisps of cigar smoke swirled into the night sky." Century also charts the "second narrative" of Ross's life, including heroism at Guadalcanal during WWII, a highly publicized struggle with morphine addiction and running guns to Palestine to aid the Jewish fight for a state—to show how Ross's life "was everything the Diaspora tradition had warned Jews not to become, but a fulfillment as well of its secret fantasy." Photos.