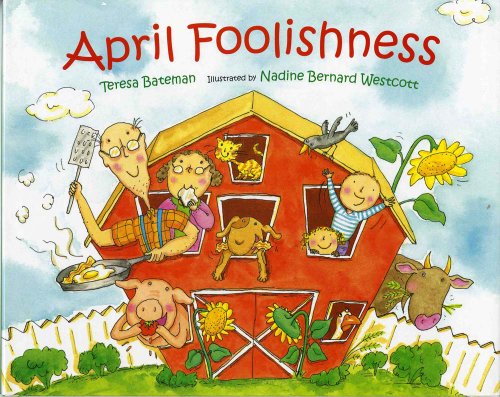 The pair behind returns to the barnyard for another heapin' helpin' of monkeyshines. It's April Fool's Day, but who's fooling whom? With tight, energetic couplets, Bateman gives voice to the visiting grandkids (aided and abetted by Grandma, it turns out) as they try to convince Grandpa that the farm is in chaos. In their scenario, first the chickens fly the coop, then the runaway pigs use the tomato patch for a food fight and finally, "Grandpa, oh, Grandpa!/ The sheep are all gone!/ I heard that they're munching/ on somebody's lawn!" Westcott, game as ever for upping the ante of any silly scene, comically imagines the renegade grazing but also throws in a pair of sheep who've gone way beyond that—they've commandeered lawn chairs, and one of them grooves to an iPod. Grandpa refuses to rise to the April Fool's bait until his wife delivers the coup de grace: "You'll find, to your sorrow,/ it's not April Fools' Day today,/ but tomorrow!" Of course, everything is normal, and Grandpa realizes that despite his best efforts, he has been busted—big-time. A closing image proves that the group is not mean-spirited but just engaging in a bit of fun. The book's double-edged joke (Grandpa won't be fooled, and so he's more foolish) and the fact that kids love the idea of adult-sanctioned mischievousness makes this a surefire giggle-inducer. Ages 5-7.