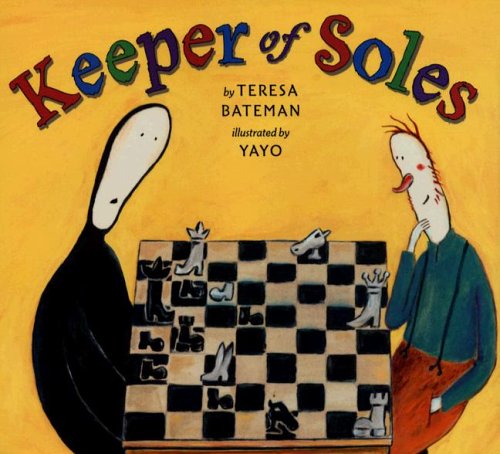 Colin the cobbler outwits the Grim Reaper in this giggly, clever twist on an old folktale. When the black-robed stranger (who vaguely resembles Edvard Munch's subject in ) knocks on the door, Colin thinks fast. "Have you ever noticed," he says to Death, "that your feet hurt after work?" Death doesn't have a chance as Colin snatches his list of names and makes a shoe pattern (in a coffin shape) out of it. Bateman's ( ) shoemaker hero mixes shrewdness and compassion with solid fashion sense: "Yes, of course, black. Something that will blend in nicely with the robe." In his acrylic paintings brushed in warm, smudged colors, Yayo tucks dry jokes into nearly every corner. Death's face is flat white, but when he gets cold, his nose morphs into a little thermometer; his toenails have skulls on them. The cobbler goes on distracting Death by making him boots for cold weather and walking shoes so comfortable that the caped gent leaps over cemetery gravestones in a single bound. When Death comes once again for Colin's soul—this time, for real, readers may fear—Colin says, "And what do you think I've been giving you all these many years?... I've given you sole after sole." Even young readers who don't understand the verbal pun will note that the teeth in Death's grinning mouth are shaped like little boots. Ages 6-10.