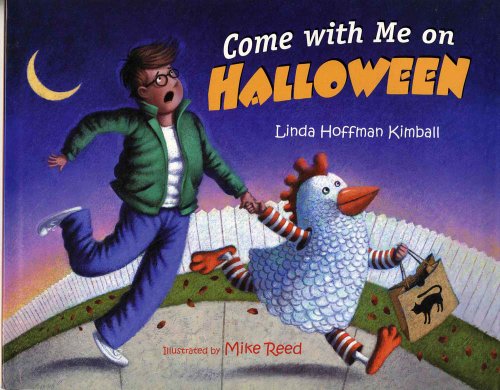 Come with Me on Halloween

Although this story's narrator wears white feathers and a red beak, his father is the real chicken. The grownup, a bespectacled fellow with a bit of a resemblance to Harry Potter, looks askance at costumed zombies and quivers over a party snack called Brains in Batter. "Never fear. You've got me near," his son says, holding his hand. Later, the child reassures the yawning adult, "See, it wasn't such a fright./ I told you things would be all right." Kimball's serviceable rhymes flip the parental power dynamic, while Reed ( ) creates well-lit scenes of spookery in glowing sunset hues. Ages 4-7.