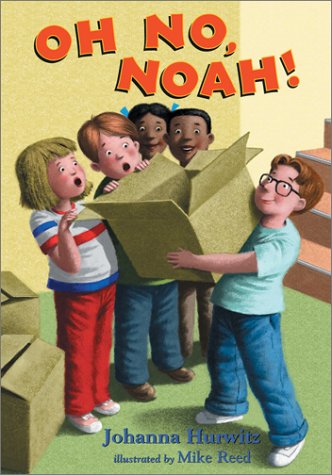 To her sizable roster of affable and believable young characters, Hurwitz () adds the endearingly bumbling Noah. Frequently eliciting the lament of the novel's title, this eight-year-old's relatively benign blunders include dropping a box of drinking glasses as he helps his mother unpack after his family's recent move. The author displays her skill at conjuring up credible predicaments and finding the humor in them. For instance, Noah bows to peer pressure and writes his name in freshly poured cement and, when the homeowner comes out to scold the boy, his friends flee and the adult reacts with unexpected compassion. Noah, at a loss to come up with a cool talent that matches those of his pals (one can burp at will, another can juggle three plums), gives the kids a peek at the moose head that his parents received as a housewarming gift. In the novel's funniest scene, Noah and his buddies—without the consent of the boy's parents—solemnly give the deer head a funeral ("Burying the head of the poor dead deer seemed like a really decent thing to do," muses the boy) and over its grave sing "Doe a Deer" and "Home on the Range." Bolstered by punchy dialogue and convincing characterization, this tale defies its title in its closing words, which are likely to sum up readers' reaction: "Oh, yes!" Ages 7-10.