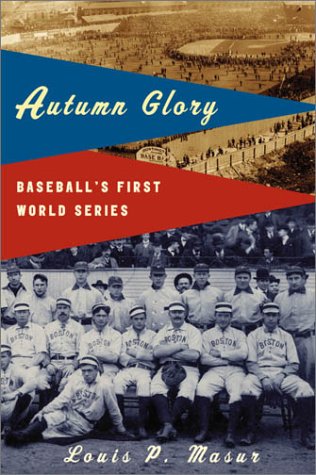 At the heart of this book by Masur () are eight in-depth, almost play-by-play, retellings of the games of the 1903 World Series between the Boston Americans and the Pittsburgh Pirates. Though the accounts of 100-year-old games can become tedious ("In the second inning, both teams went down easily"), for the most part Masur's storytelling skills ("He walked slowly, but not because of age. Pitchers always had a deliberate way about them") keep the book moving. Interspersed among the game recaps is a closely considered, detailed account of how the World Series was invented. Punctuated by chapters with titles like "War," "Peace," "Winter" and "Spring," Masur's presentation of the violent birth of the fall classic as the result of a bitter war between the established National League and upstart American League takes on a decidedly Yeatsian tone. Thankfully, the dense, political nature of these chapters is balanced by more colorful tales of the era, like Pittsburgh manager Fred Clarke being "pummeled" black and blue by an opposing player and the New York Giants' Christy Mathewson winning three games of a four-game regular season series versus the Pirates that demonstrate how much and how little the game has changed over the years. Despite a summer release in honor of the Series's centennial, Masur's work is a prime example of a winter baseball book: a story to stoke the fire of baseball lovers whose hope of a World Series title has become every fan's entitlement for the past century. Illus.