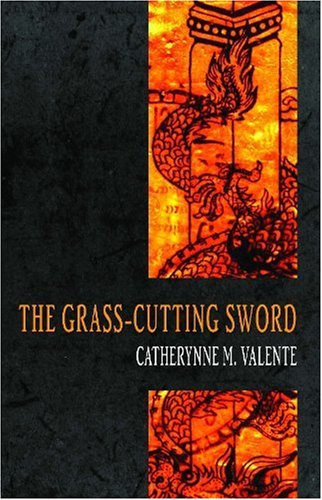 Similar in tone and style to (2005), Valente's baroquely layered fantasy tells an earthy tale of heroes and monsters. Banished from heaven, Japanese trickster god Susanoo-no-Mikoto, a kami with powers over the wind and the oceans, bemoans his fate and travels across mundane lands hoping to find solace with his mother, Izanami-no-Kami. Then a peasant couple beg him to rescue their daughter, who was kidnapped by a great eight-headed serpent—the same serpent that took her seven sisters before her. When the peasants tell Susanoo he may take the eighth daughter as his wife, he agrees. He trails the serpent to the village of Hiroshima, where he slays it and creates the Grass-Cutting Sword from its spine, even as his new wife ignores his lordly reassurances and mourns the monster. This lyrical, language-driven novella alternates between the awkward ("peasant-colored" people) and the sublime, as when Susanoo departs Hiroshima: "footprints flaming over the city, burning white and sere... and a hot wind followed after them."