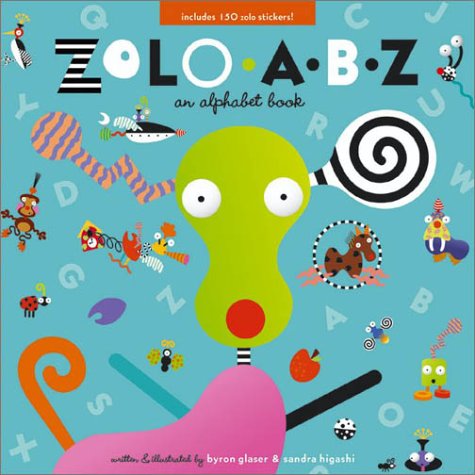 Glaser and Higashi take their line of Zolo playsculpture toys—a kind of hipster mutant Tinker Toys—as the inspiration for this uneven, hyperactive alphabet book. Ozlo, a Zolo-composed dog with a pink body, green head and ping-pong eyes, guides readers through the letters ("Ozlo has something he wants you to see! Starting with A and ending with Z"). Several other Zolo characters make cameo appearances, including beatnik-esque BoDiggety and a fashionista named Oola. A handful of layouts bubble with cheeky, twitchy charm. "J" takes Ozlo to a blue-and-green striated ocean, where he juggles smiling jellybeans and jumps rope with roly-poly jellyfish: "Jeepers! A jiggly jellyfish jubilee! Ozlo jumps and juggles joyfully." For "N," the page goes black: "No Ozlo. Nope. Nothing. Nada. Nil"; and in an illustration of an X-ray (for X), readers can find the entire alphabet inside the patient's head. But many of the letters come across as a jumble of fluorescent pastels, dingbats, dizzying patterns and indiscernible shapes. The self-conscious naïveté and amphetamine aesthetic fueling the pictures may be some grownups' idea of high style, but most young readers won't be able to follow the alphabetic thread. The book's last two pages are devoted to 150 Zolo-themed stickers. Ages 3-up.