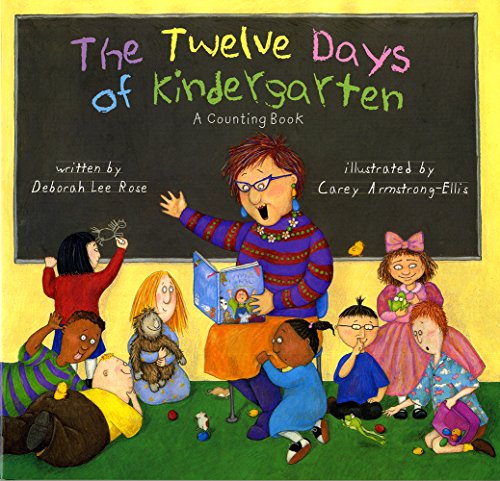 THE TWELVE DAYS OF KINDERGARTEN: A Counting Book

While Rose () cheerily ticks off the touchstones and tokens of kindergarten life to the tune of a Christmas classic, ("On the sixth day of kindergarten, my teacher gave to me/ fish for feeding,/ five gold stars!/ Four puzzle shapes,/ three pencils,/ two pictures books,/ and the whole alphabet from A to Z"), Armstrong-Ellis's () irreverent spreads tell quite another story. She creates a rather skittish blonde girl, clinging to her stuffed gorilla, as the story's narrator. The artist conveys the heroine's steadily building confidence when, at a Fire Safety assembly on the fifth day, she takes the stage, earning five gold stars. In another humorous detail, her teacher wears a dress trimmed in a flame-like motif. The classroom is stocked with cut-ups as well, among them an extremely timid girl with a death grip on her teacher's skirt and a boy who finds the contents of one nostril endlessly fascinating. Together, they innocently wreak havoc, releasing a swarm of bees at a nature museum, aiding in the escape of the classroom hamsters' many offspring, etc. The 12th day culminates with a spontaneously generated "We Love School" banner, and a hug for a now-beloved teacher; classroom leaders with a sense of humor will enjoy sharing this book at circle time. Kids, however, will get a hoot out of spotting the new and running jokes on each spread (one horse-obsessed girl evolves into an accomplished equine portraitist by book's end), and watching the teacher's best-laid lesson plans deteriorate into comic melees. Ages 4-8.