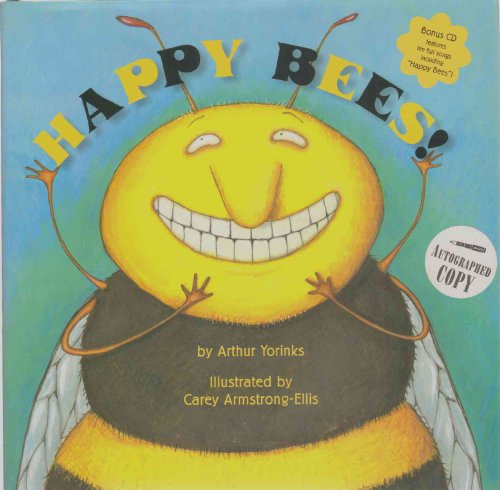 Visual slapstick humor abounds in this romping rhyming tribute to bees. Full-bleed, cartoon-like illustrations tell the story of a swarm of bees, waved off from the hive by the queen. While gathering pollen and playing pranks on each other, they wreak havoc on humans and animals alike. All of the critters and people share the same facial features: bug eyes, bulbous noses, straight white teeth. The bees loom large on the page and the world is their playground: one naps on a bear's head, another walks tightrope on a spider's web, a third sunbathes on a raft in a glass of lemonade. Running sight gags include a bear assuming a variety of disguises (tree, bee, pizza delivery man) to gain access to the hive, and a growing train of people fleeing the swarm (on each page another person, and finally a cow, joins the panicked flight). The verse is largely nonsensical and occasionally forced: "Happy bees/ both hes and shes/ live in Belize/ or wherever they please." The pictures are the selling point, and at moments text and illustration complement each other well. For example, the line, "Happy bees/ how/ could/ you/ not/ love 'em" accompanies an illustration of a dog and bear both fleeing the scene. The book comes with a bonus CD with 10 catchy songs about bees (one of which shares the book's title, though the lyrics don't correlate exactly). Playful and engaging, this volume will get youngsters buzzing. Ages 3-6.