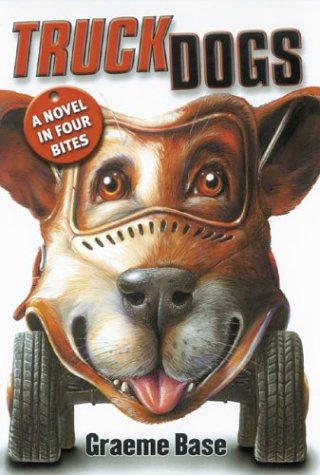 "Even the smallest cog in the biggest machine has a vital job to do," says the battered but wise "Red Setter/Tractor," Rex, in this fever dream of a story. The Australian author sets the book in an arid outback where society consists of the titular hybrid species ("half vehicle, half dog"). Base ( ; ) playfully illustrates the TruckDogs on 16 color plates—from the noble widow "Irish Setter/Land Rover Discovery," Mayor Plugg, to Hercules, the "Great Dane/Ore Truck," who leads a scruffy street gang called the Mongrel Pack. The citizens of Hubcap drive the Pack members out of town, sick of their hooliganism. But just after the mongrels depart, in rolls the vicious RottWheeler gang, led by the equally ruthless Mr. Big—half Chihuahua, half BMW Isetta. The gang imprisons the townspeople, and begins systematically siphoning their most precious resource—fuel. Naturally, it falls to the Mongrel Pack to return to Hubcap and save the very people who shunned them. Humorous touches pepper the tale (e.g., the old codger pick-up Farmer Howell, whose flatulent backfires constantly threaten to start a fuel fire), and some poignant moments, such as Rex's understanding (and even Mayor Plugg's fleeting insight) that the Mongrel Pack members are simply bored teenagers who need some direction. Once readers accept the farflung premise, Base's latest maintains his well-deserved reputation for big, colorful characters and ideas. Ages 8-12.