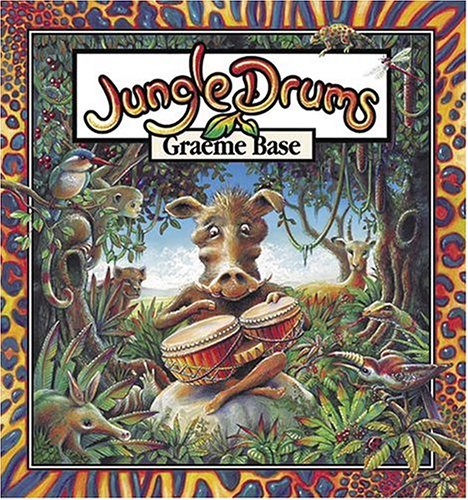 In this disconcerting fairy tale, a young warthog uses magic bongos to cast spells on his vain jungle neighbors, and the results are not pretty. Ngiri Mdogo, literally "little warthog" in Swahili, hates being the runt of the forest. " 'No spots?' laughs Chui the Leopard. 'No stripes?' whinnies Punda Milia the Zebra." Ngiri Mdogo complains to Old Nyumbu the Wildebeest, who lends him two special drums but warns that the outcome is "not always as you expect!" The first time he beats these "jungle drums," the pompous beasts turn neutral beige and lose their identifying features; the elephant no longer has its trunk, nor the rhino its horns. Their markings appear on the other warthogs (not the hero), who proudly parade around the muddy riverbank. Ngiri Mdogo plays the drums again, but the warthogs only transform further into giraffes and zebras, the leopard gets the rhino's gray skin and the elephant acquires leopard spots. Base painted naturalistic, if anthropomorphic, beasts in , but here he plays mix-and-match with exaggerated, garish cartoon creatures until a third wish restores normality. The book's most engaging aspect is its hide-and-seek game; chameleons, birds and snails flicker in the greenery, and semi-transparent portraits of the wildebeest appear in every spread. The forest yields details, but readers may be put off by the unpleasant discombobulations that beset the main characters. Without the alphabetic format of and the visual interplay of , the story feels like a hollow vessel for delivering a clichéd message. Ages 4-8.