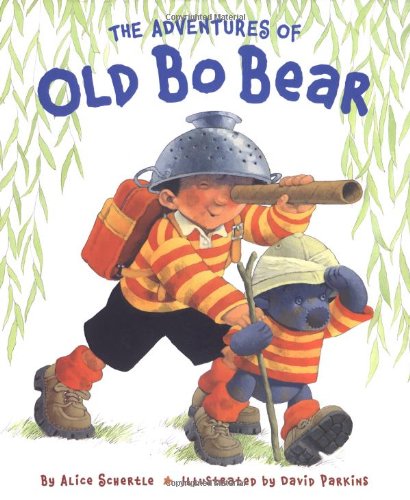 The Adventures of Old Bo Bear

A boy's lively imagination sends him and his stuffed bear on rip-roaring adventures in Schertle's ( ) rhyming romp. Dressed in a striped shirt and shoes identical to his owner's, Old Bo Bear gets so dirty that the narrator's mother insists on washing him. Alas, "an awful thing happened when Bo got clean—/ " Undeterred, the intrepid lad packs provisions, and he and his bear go on to battle pirates at sea, and capture outlaws in the Wild West. Rendered in acrylic and alkyd paints and pencil, Parkins's ( ) energetic, light-filled art comically portrays the escapades of the wide-eyed, wild-haired boy and his endearingly expressive bear. The tale slyly segues between the real and imagined worlds, suggesting explanations for Bo's missing ear (such as his adventures as a rodeo star: "He was bucked off once and he lost an ear,/ but he just said, 'Shucks, that's one ear gone.'/ And he kind of grinned, and he climbed back on"). Despite its occasionally bumpy rhythm, the verse's jaunty tone makes this a natural read-aloud. An especially satisfying ending depicts the two blasting off in a spaceship in a final, wordless spread, Old Bo Bear safely hidden from the boy's mother (and her laundry basket). Ages 3-7.