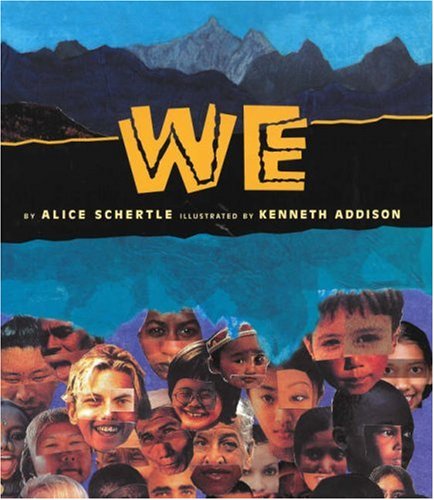 This broad chronicling of human history begins and ends with a river that “carved its shallow bed/ deep into the soil of Africa.” Between the tributary bookends is a collective first-person narrative that lyrically traces human evolution, from apes to astronauts. Initial mixed-media collages show silhouettes of early man walking upright across various African landscapes, though the story soon moves off that continent: “We built boats/ and made sails to catch the wind/ and were lost on the vastness of the sea/ until we found another place.” While Schertle’s (The Adventures of Old Bo Bear) unpunctuated free verse never mentions race, the multicultural tone of the book echoes loudly in the diverse people pictured, from imams to a British Beefeater to African-American musicians. Addison, who died shortly after finishing these illustrations for his first picture book, pieces together bold spreads that invite lingering. The aesthetic scenes are a busy, eclectic mix of pastels, paint, torn paper and photographs that record human advances while also placing the innovations against the larger context of the natural world. Lush jungle foliage in one double spread backs a quirky assortment of people and inventions (e.g. donuts, four-poster beds, bicycle pumps). Exploration of ocean depths and outer space is highlighted before the tale returns to the original African riverbed, where archaeologists now dig. A compelling work that celebrates humankind’s shared beginnings as much as its diversity and achievements. Ages 6-up. (May)