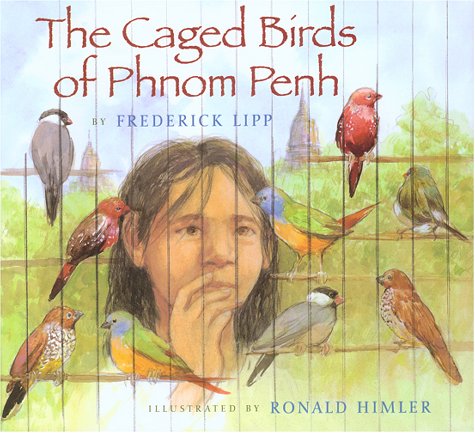 THE CAGED BIRDS OF PHNOM PENH

Rendered in watercolor and gouache over pencil, Himler's () softly focused portraits of a winning young heroine carry readers through a few of Lipp's ( ) wordier passages. Though eight-year-old Ary has heard about the rural rice fields where birds fly free, she lives in the Cambodian capital where the "yellow winds grew gray. Gray winds were difficult to breathe." The only birds she knows are "prisoners" in the cage of the bird lady, who sells them to tourists. After the girl uses her savings to purchase a bird, she sets it free since, according to local custom, giving a caged bird its freedom makes wishes come true. But her bird immediately returns to the safety of the cage. On a second attempt, after considering advice from her grandfather, she purchases a sickly bird that "held a secret long forgotten by the other birds." This one soars into the sky and on to freedom. The author includes some heavy-handed imagery ("This is our cage, Ary thought, as she lay her head on the mat"), but his thought-provoking, open-ended conclusion shows the tale in a new light. Himler's appealing art conveys the girl's changeable emotions as well as the heroine's intelligence and optimism as she interacts with the world around her. Ages 4-8.