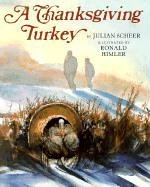 A 13-year-old boy and his grandfather spend months hunting down a wild turkey in the early-morning darkness in this nostalgic and affecting story. But when they finally come face-to-face with their prey, the grandfather cannot bring himself to shoot it. Scheer and Himler (previously paired for ) simultaneously develop the boy's relationship with his grandfather and with the woods. The story smoothly incorporates facts about turkeys' roosting habits, while the sketchy but realistic watercolors evoke the enchantment of the predawn hours. Ages 4-8.