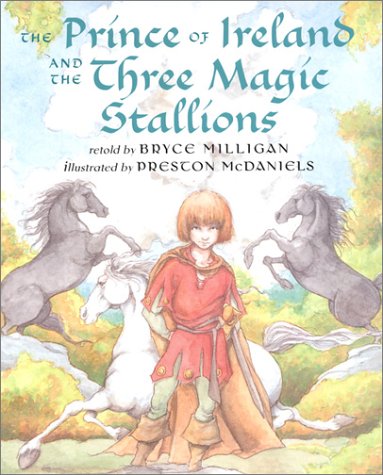 THE PRINCE OF IRELAND AND THE THREE MAGIC STALLIONS

With a mellifluous, somewhat wordy style befitting the Irish storytelling tradition ("There once was a king in Ireland who had a young queen. They had one son, and all was well and naught was ill"), Milligan () revisits an ancient folktale filled with challenges and quick-thinking characters. The widowed king of Ireland's new queen aims to see her own progeny—not the king's eldest son—on the throne one day. To that end, she places a "geis," or curse, on the prince, presenting him with the seemingly impossible task of stealing three magical horses from a powerful giant. The prince in turn places an equally harsh geis on his stepmother. Then, with the help of his two half-brothers and his skill for weaving a clever story, the prince succeeds and sets all to rights in the royal family. Despite colorful turns of phrase and some potential derring-do, younger readers' interest may wane during this lengthy outing, and a few will likely puzzle at the subtle plot clues leading to the prince's victory. McDaniels's () watercolor-and-pencil spreads, featuring wispy lines sometimes suggestive of Trina Schart Hyman's work, wrings notes of humor and drama from the tale. Old-World dress and a rugged, unfettered countryside give the proceedings a fitting backdrop. Ages 6-10.