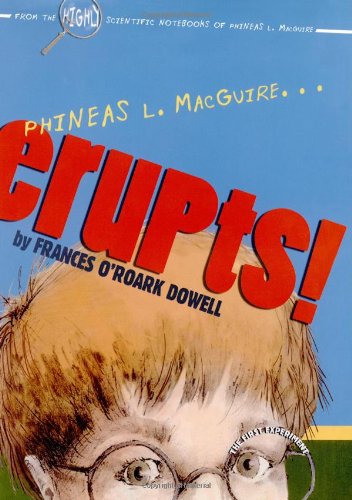 Dowell ( ) creates a likable hero who proves that kids can be both smart and funny. Fourth grade does not get off to a super start for Mac in this first installment of the From the Highly Selective Notebooks of Phineas L. MacGuire series. In his clipped, comical first-person narrative, he explains that his best friend, who shared his passion for science, recently moved away. His "un-best friend," also named Mac, is a new classmate whose tough-guy persona immediately alienates his peers. When their teacher pairs the two as partners for the science fair, narrator Mac wants to do their project on mold and the new Mac suggests they do it on dinosaurs (they pick a third that gives the book its title: an erupting volcano). On a visit to his new classmate's apartment, Mac makes some un-scientific discoveries: the boy's name is actually Ben (he changed it so he'd have something in common with someone in his new class), he is an accomplished artist who creates comic books, and he is "really a pretty nice person." Dowell nicely builds their blossoming friendship, and Mac devises a plan to re-introduce Ben to their classmates. Several subplots further enliven this amiable tale, among them narrator Mac's friendly rivalry with a smart classmate who insists that she will win first place at the fair. McDaniel contributes spirited half-tone illustrations to the novel, which concludes with directions for performing several experiments mentioned in the story. Ages 8-12.