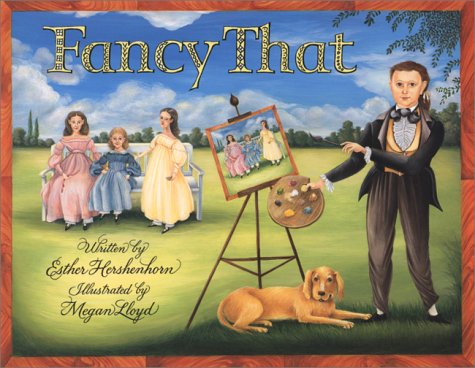 In sonorous prose, Hershenhorn () spins a historical story about a young "limner" (a traveling portrait painter). Newly orphaned in 1841, Pippin Biddle leaves his three younger sisters at the local almshouse and aims to buy the family's independence by selling paintings like their late father did. But his portraits lack tact, and Lloyd's () humorous paintings-within-paintings show why they fail; Pip truthfully includes in his portrait the big ears, bumpy noses and foul tempers of Pennsylvania's citizens. "Was he blind as a bat, they asked, to render such likenesses? How could he not see a fine and handsome face?" Hershenhorn stays loyal to 19th-century American diction, with disarming results: Pip's signboard reads, "Correct likenesses taken with elegance and dispatch." Lloyd has mastered the egg tempera medium, which may have been used by limners, and her work alternates between the checkerboard orchards and tranquil cattle of American folk art and a more comical style used for Pip's encounters with his customers. Cottony white tones serve beautifully for the clouds that accompany Pip on his journey and for the driving snow that greets him as he returns, just in time for Christmas. Pip doesn't get to be the hero of his own story—his sisters, not he, save the family from indigence—but Hershenhorn and Lloyd's collaboration is an unqualified success. Ages 4-8.